Free private transit is a pain in the neck

Proposed Shuttle Bus Plan to Solve San Francisco's Public Transportation Woes | Complex: "The private buses service companies such as Yahoo!, Google, Facebook, Apple, eBay and Genentech. Complete with air conditioning and Wi-Fi, these buses regularly stop and public bus stops and block intersections, creating a nightmare for everyone except their passengers and the companies who charter them. So far, the MTA's method of dealing with the problem has been to not deal with the problem."

Give up driving, take public transit and save money, a new report says - Vallejo Times Herald: "Goodwin said he agrees with the NRDC report. He cited a 2010 agency report indicating that Bay Area residents who fall into low- and lower middle-income categories spend 72 percent of their income on housing and transportation.

Those who earn more money spend less than half their income, or 41 percent, on those items, he added.

"If you live in a neighborhood with the least amount of access to public transportation you are spending $5,400 more per year than someone in a household with the best transportation access," Tracey said."

Traffic jams from BART strike prove the importance of #publictransit 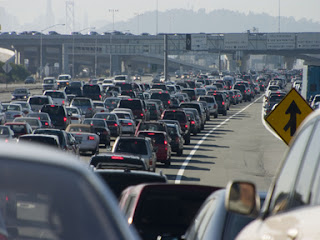 BART strike: "The BART strike has paralysed commuter traffic by contributing to the largest traffic jams in the Bay area since the last BART strike in 1997."
at 2:43 PM No comments:

Alaska Dispatch: "The San Francisco transit strike that has stranded 400,000 commuters, snarled traffic, and all but crippled remaining public transport systems this week is costing the Bay Area at least $73 million a day in lost worker productivity, economists say."
at 11:45 PM No comments: