We ARE NOT BROKE - Make public #transit fare-free!

National Day of Action for Public Transportation Apr 4 | Occupy Las Vegas @ OccupyLV.org: "Rather than fighting price hikes and service cuts, we should be focusing on expanding service and innovating more sustainable and convenient systems for mass transit that are free for all. The economic downturn has been used as a reason to cut back service, raise fares, and layoff workers in Boston and elsewhere. We are told again and again that there is no money, but we have had enough of this lie!" 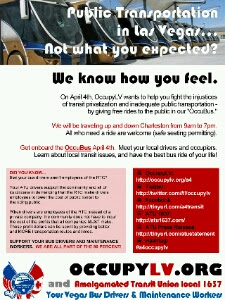 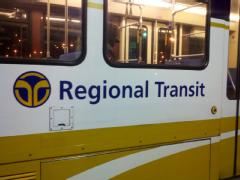 Ridership is up, so #transit must be cut. Makes perfect sense to oil industry.

Nevada Progressive: Move Me Like That.: "And considering the rising demand for mass transit here in Nevada, we'd be preparing to offer more services to more riders. But sadly, that's not the case. Instead, RTC Ride in Washoe is facing financial woes and difficult decisions on how to fund future transit operations. Meanwhile down south, RTC Southern Nevada is facing public anger over proposed rate hikes and cuts in paratransit service... Again, despite increasing ridership.

It really doesn't make sense to punish transit riders for choosing to use mass transit. I mean, isn't that what we want? Don't we want less clutter on our streets and freeways? Don't we want cleaner air and fewer greenhouse gas emissions? Why would we do something to discourage people from using RTC in Reno and Las Vegas?"