REGION: Bill would mandate transit improvements before freeway expansion: "A state Senate bill that takes direct aim at North County's Interstate 5 expansion plans was introduced Thursday by Sen. Christine Kehoe, D-San Diego.
The bill, SB 468, would mandate mass transit improvements along California's coast before any freeway lanes can be added in the same areas, according to Kehoe's office."
at 7:13 PM No comments: 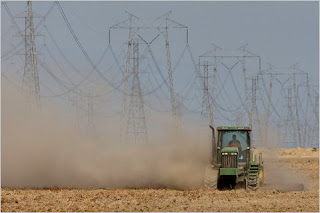 Dust billowed as a farmer plowed a dry field in near Buttonwillow, Calif., in April 2009, when the drought was in its third year.
Southwestern Water: Going, Going, Gone? - NYTimes.com: "The glum projections of the growing gap between demand for water in the Southwest and the dwindling supplies have never been optimistic, but two new studies— one a research report based on satellite data, and the other an analysis of rainfall, water use and the costs associated with obtaining new water — make earlier forecasts seem positively rosy."
at 11:22 PM No comments:

Green Caltrain | BayRail Alliance Blog: "Over 800 of us have sent letters to decision-makers to support Caltrain and prevent drastic cuts. Over 200 of us attended the Caltrain grassroots summit. The outpouring of community support is visible and making a difference. Now it’s time to show up and speak to the decision makers face-to-face if you can. Please plan to attend one or more of these meetings Thursday Feb 3 and over the next 3 weeks to tell decision-makers to avoid drastic cuts to Caltrain."
at 9:31 PM No comments:

ThinkProgress » After Lobbying To Kill The Stimulus, Koch Meeting Attendees Guarded By Police Saved By Stimulus

Stimulus-Funded Riverside County Sheriffs Guarding The Resort Hosting The Koch Brothers
ThinkProgress » After Lobbying To Kill The Stimulus, Koch Meeting Attendees Guarded By Police Saved By Stimulus: "The Koch gathering was highly guarded by a phalanx of police officers, a helicopter, and even a no-fly zone around the resort. David Dayen, who chronicled much of the demonstration, reported that the city of Rancho Mirage contracts its police force from Riverside County sheriffs. Ironically, Koch’s front groups lobbied aggressively to kill some of the funding for the very sheriffs who worked tirelessly to ensure safety at the event."
at 2:40 AM No comments: